The North Hills redevelopment is a complete urban rebirth of the first two-story mall between Washington, DC and Atlanta.

The North Hills redevelopment is a complete urban rebirth of the first two-story mall between Washington, DC and Atlanta. Since the opening of the Main District in 2004, North Hills has become the defining presence of Midtown, distinctive in character with its own sense of place. It serves as a hub of commercial and residential activity in Raleigh and continues to receive numerous awards and accolades for its pedestrian-friendly and sustainable design. 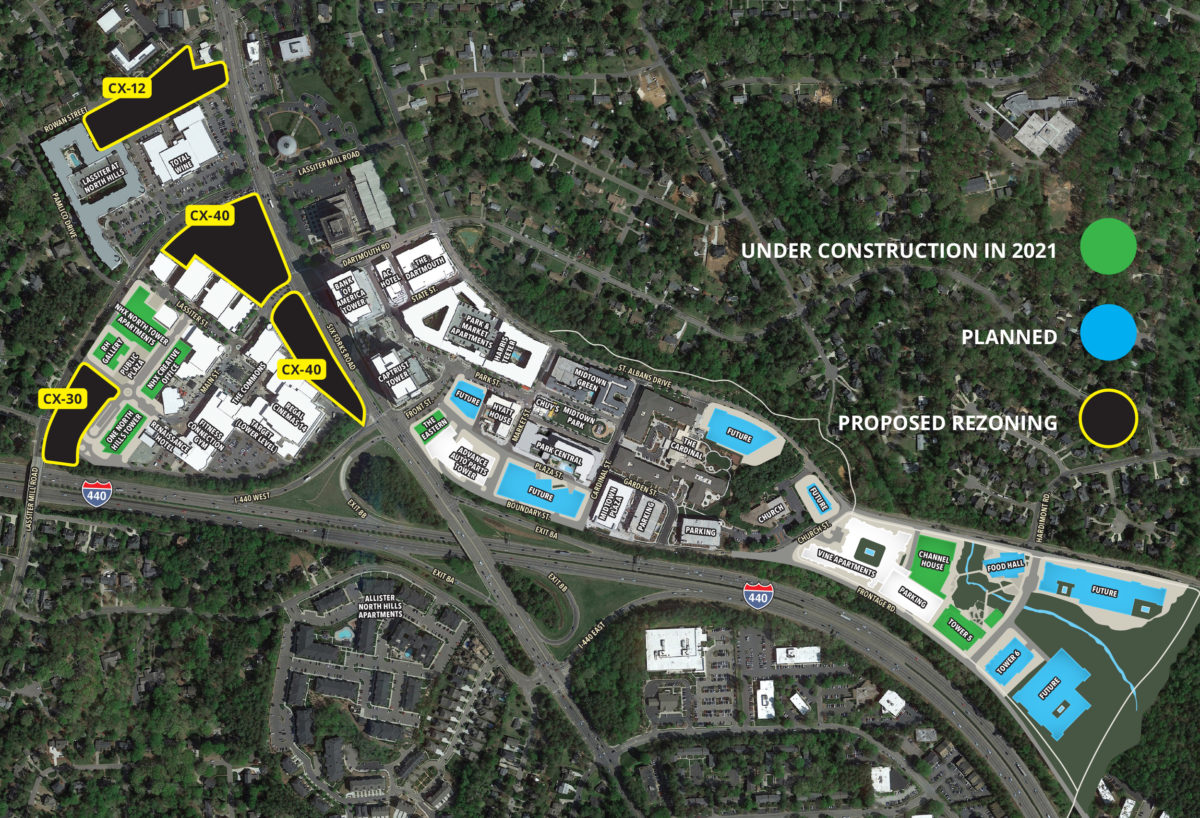 The rezoning request will seek to align these strategic parcels with the progression of the surrounding development and provide the framework for North Hills to accommodate the increasing demand in Midtown Raleigh.

The request will include four parcels which are non-contiguous and located in both the Main District and Lassiter District. Today, most of these areas have not been improved since the original mall was built in the 1960s. The land is underutilized and serves predominately as surface parking and single-use retail. We believe the time is right to transform these parcels to their highest and best use for current and future generations of Raleigh. Growth of the surrounding region has been well documented;from 2001 to 2018, Wake County has seen a 66% increase in population, with a current average growth of 67 people per day. According to an independent study commissioned by Wake County Economic Development, the population of Raleigh is projected to increase another 70% by 2046. With all of this growth comes the need for more placemaking, where Raleigh residents, new and old, can find spaces to live, work, play, and stay.

The primary purpose of the zoning request is to obtain additional building height allowances to accommodate new growth within the existing footprint of North Hills. Vertical redevelopment is more environmentally sustainable than greenfield development, helps decrease suburban sprawl, and promotes the use of public transit. These parcels are uniquely situated for vertical redevelopment because they are within a City Growth Center – areas the City has identified as prime for development, along a Transit Emphasis Corridor, and close to existing amenities which will enhance walkability in the area.

This timeline will be updated as meetings are scheduled and dates finalized throughout the rezoning process.

This section will be updated as more information and resources become available throughout the rezoning process.

One of Kane Realty’s key values is relationships. We seek to build long-term relationships with the community at large and especially with our neighbors. In an effort to hear directly from you and to better understand your desires for the future of North Hills, we have provided a survey below and would appreciate your candid participation. You can also reach out to us directly at rezoning@visitnorthhills.com.